If you have lots of Disney Blu-ray movies for your kid, why not rip it into your iPad with small size for your kid, so that he(she) can watching it anytime and anywher, instead of sitting in fornt of TV.

Usually, when you want to shrink a regular Blu-ray movies for putting it to iPad Mini with small size, you can achieve it through the ways: reduce video resolution, lower video bitrate, trim a full Blu-ray movies to several fragments. This needs your Blu-ray Ripper to have the ability of allowing uses to customize video. Brorsoft Blu-ray Ripper (Windows | Mac) – 39% off – Price: $55.95 $33.95 is a smart choice if you don’t know which one to choose among many recommendations from Google.

With Brorsoft Blu-ray Ripper, what you can do:

Download and install Brorsoft Blu-ray Ripper. Then launch it and click “File” > “Load from disc” to load your Disney Blu-ray movies to the software. You can choose desired subtitle/audio track below the chapter list. 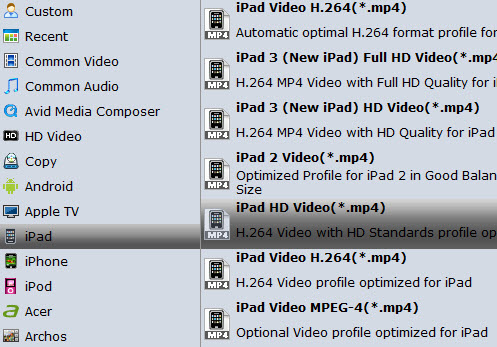 Open “Settings” windows, here you can see video/audio parameters. You can change the number in the corresponding box. Just keep in mind that bitrate has more influence on video size than resolution. But don’t ignore the video quality while you want a smaller Blu-ray rip for iPad.

On the other hand, you can trim the original Blu-ray to 2-4 fragments and then put the Blu-ray movie segment to iPad one by one.

Back to the UI, click “Convert” to start to backup bloated Disney Blu-ray to iPad with smaller size.

Finally, transfer the small Disney Blu-ray rips to iPad for for your kid for playing anywhere and any time.

How to Rip and Transfer Blu-ray to iPad Air

How to Rip DVD/Blu-ray for Playback with iPad Air