Different from Xbox and PlayStation game consoles, the Will U has a GamePad to enable you play games directly on the Gamepad conveniently. However, the game console Wii U has no capacity to playback Blu-ray movies on it. If you want to play Blu-ray movies on Wii U, you’d better rip your Blu-ray discs to Wii U compatible MOV format for playback without hassle. Here’s how to do and please follow me.

To rip Blu-ray to MOV for playing on Wii U, a professional Blu-ray ripper is needed. As you see, most of Blu-ray discs are under high protection, the freeware like Handbrake couldn’t do it well. Here Brorsoft Blu-ray ripper for Windows / Mac is your best choice. With it, you can remove all the protection from Blu-ray discs and rip Blu-ray to Wii U compatible MOV format in fast speed and flawless quality. Besides, this easy to use yet professional Blu-ray ripper can rip any Blu-ray/ DVD discs to other popular video formats such as MPEG-4, H.264 MPE, AVI, DivX, XviD, WMV, 3GP, MKV, FLV, VOB in HD, Full HD and even 4K. Just download the free trial program and rip Blu-ray to MOV for playingon Wii U smoothly.

Insert your Blu-ray disc into your BD drive, and click “load disc” button to load your Blu-ray movies to the program.

As Wii U has the same format compatibility with Wii, here, you can output Wii preset profile format “Wii” > “Wii MOV Video(*.mov)” from “Format” drop-down list. 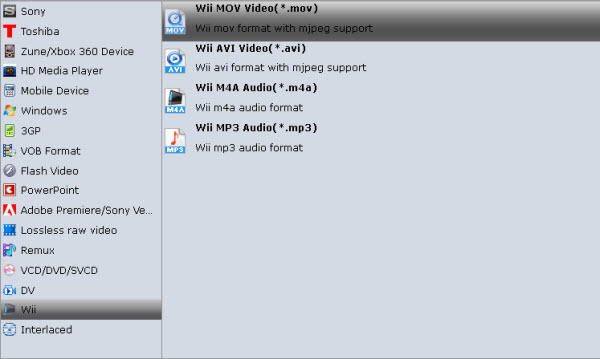 Tip: If you like, you can click on “Settings” to adjust the frame rate, resolution, and bit rate and more for your movies.

With all preparation, press “Convert” button to rip Blu-ray to MOV videos for Wii U.

Once the conversion is done, click “Open” button to locate the converted files, then transfer the ripped Blu-ray movies to a USB Drive and plug into Wii U console.

Now you’re able to play the converted Blu-ray movies on Wii U smoothly.

And you can also use Video ultimate to rip and convert Blu-ray/DVD, Videos or ISO files to MP4 videos for playing on Wii U at ease.

Blu-ray & Xbox One S: Play all Blu-ray on Xbox One s

How to Convert Blu-ray to new Apple TV 3 with AC3 5.1 audio track